We help government make better policies that benefit every Filipino.

The Philippine Institute for Development Studies (PIDS) was created on September 26, 1977 by virtue of Presidential Decree No. 1201. It is organized as a nonstock, nonprofit government corporation. 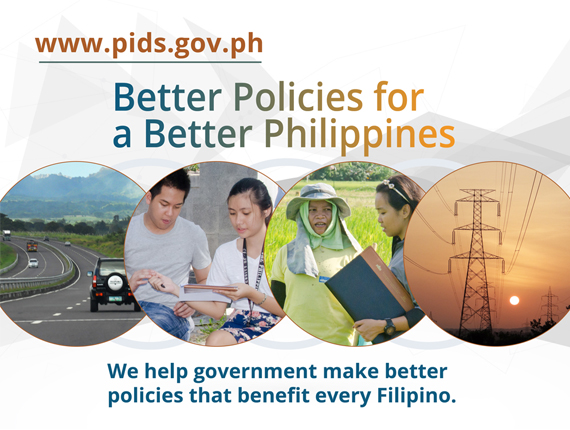 PIDS serves as the Philippine government's primary socioeconomic policy think tank. Since its establishment, PIDS has been engaged in the conduct of policy-oriented studies to assist policymakers and planners in crafting development policies, plans, and programs that are based on sound research evidence. It has completed numerous studies on a wide range of development topics. These studies have supported the Philippine government in the formulation of relevant policies and programs that are vital to attain inclusive and sustainable development. The Institute has also made significant contribution and influence to Philippine policy development through its active and close collaboration with Congress, government agencies especially the oversight offices (National Economic and Development Authority, Department of Budget and Management, Department of Finance), academic and research organizations, private sector, civil society, and international organizations. Its research outputs are widely disseminated through publications, seminars and conferences, knowledge databases, and social media.

To carry out its mandate, the Institute maintains three basic programs: Research, Dissemination and Research Utilization and Outreach.

PIDS was recognized as among the world's top think tanks in the 2020 Global Go To Think Tank Index Report released by the Think Tanks and Civil Societies Program of the University of Pennsylvania. PIDS placed 33rd among the 110 top think tanks in Southeast Asia and the Pacific (excluding India). PIDS was also recognized as a top international development think tank (61st among the top 128) and a top education policy think tank (29th among the top 72). PIDS also made it to the list of best government-affiliated think tanks (66th among top 72), top social policy think tanks (22nd out of top 120), and think tanks with the best external relations/public engagement program (75th among top 76). A total of 11,175 think tanks from all over the world were assessed in this round.