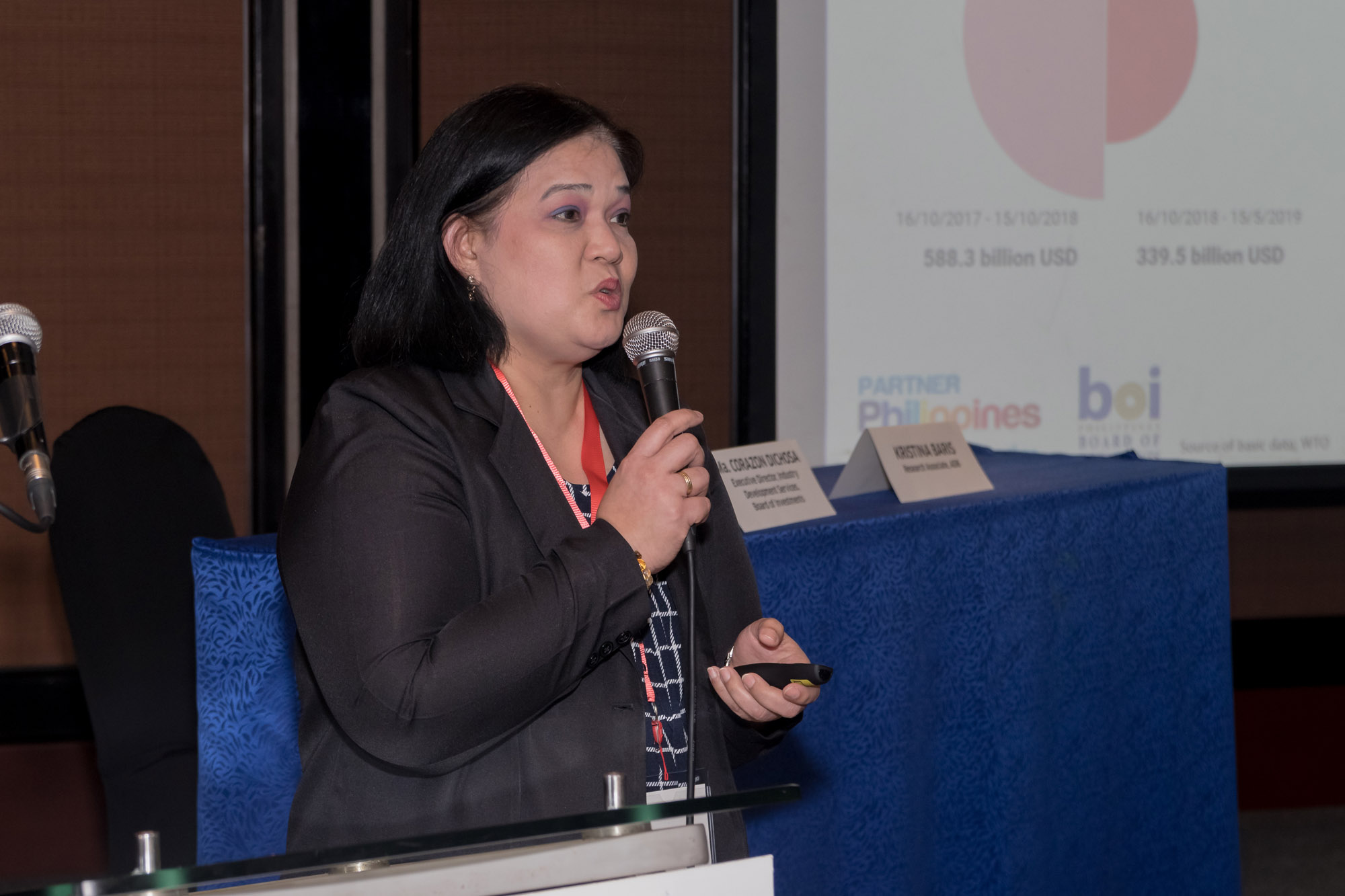 Trade deficit in the Philippines is quite alarming, said Executive Director Ma. Corazon Dichosa of the Board of Investments (BoI), an attached agency of the Department of Trade and Industry (DTI).

Dichosa revealed that the trade deficit of the country for the past five years has averaged 76.54 percent.

“[F]rom 2014 to 2018, our trade deficit has been growing. [I]t is already around USD 127.93 billion. What is alarming is that trade deficit has been increasing in the last year, 2018, and has ballooned to negative USD 47 billion,” Dichosa said during the Annual Public Policy Conference (APPC) organized by state think tank Philippine Institute for Development Studies this year.

Dichosa said China is the “bulk contributor” of the trade deficit, which accounts for 32.41 percent, followed by South Korea, Indonesia, Thailand, and Taipei. As mentioned by the BoI official, these countries account for more than 90 percent of the Philippines’ trade deficit.

In terms of products, the country’s top sources of deficit are automotive, petrochemicals, coal, and steel. These products are considered as major imports since the Philippines cannot produce them.

Dichosa said the Philippines imports a lot of steel bars because local manufacturers are just starting to expand to cope with the demand of the government’s Build, Build, Build program.

The country also imports coal from Indonesia because the supply in Semirara has a low-heating value which some power plants cannot use.

The importation of cars is also a major contributor to the country’s ballooning trade deficit. Dichosa said the automotive sector has not grown to a certain point where it can supply the local demand. “It would have been better if these autos were manufactured in the Philippines because that would have contributed to the economy,” she commented.

Another source of trade deficit noted by Dichosa are the Philippines’ neighboring countries. “[T]he markets that we trade in [are] the same set of countries that we compete with. For all the ASEAN members, our major markets would be the EU, US, China, and Japan,” she explained.

One of the strategies identified to lower the trade deficit is “by exporting more and importing less”. However, Dichosa noted that this can only be done if the Philippines has good supply chains.

The implementation of a “robust industrialization policy” is also a way to address this issue, Dichosa added, explaining further that the Philippines “will not go to protectionist measures” and “will not hesitate to impose trade remedies” if necessary. She mentioned that the country has already imposed trade remedies on cement. “Any imports coming from Viet Nam, which is a heavy source of cement in the Philippines, will now be imposed additional tariffs. We will also be doing this for other products  in the coming months,” the BoI official disclosed.

Another remedy to lower the trade deficit is to tap the different free trade agreements (FTAs) of the Philippines. According to Dichosa the country has an expansive market access and huge network of FTAs. “[W]e have the ASEAN and the Regional Plus One with Japan. We have bilateral FTAs with Switzerland, Norway, Lichtenstein, and Iceland. We have a regional FTA with Australia, China, Korea, India, and New Zealand.  We enjoy GSP [generalized system of preferences] plus status with the EU, which means that export products that fall under more than 6,000 tariff lines enjoy tariff reduction in the EU market. We also enjoy benefits from the US, Russia, and Canada GSP,” Dichosa said.

The DTI and BoI are also undertaking industry development initiatives to complement these strategies.

One is creating enabling business environment for investors by encouraging them to access BoI’s services and to work closely with the agency.

Said agencies are also intensifying industry promotion strategies, particularly in Taiwan, as many Taiwanese companies are looking for areas to relocate their factories. According to Dichosa, the Philippines was able to entice medium to large companies from Taiwan to set up businesses in areas like Batangas.

DTI and BoI are also working with the World Bank to strengthen development programs. “We are trying to match small and medium enterprises (SMEs) with multinational companies and doing reverse trade fairs, so that we can tailor-fit the requirements of the MNEs [multinational enterprises] with the capability-building efforts that we do for SMEs. We have done this with the automotive sector,” Dichosa shared.

She also stressed the importance of developing the country’s human resource. Dichosa said they will be converging with education institutions to improve the skills and competencies of Filipinos. “We want our population to continue being a demographic sweet spot. Our goal is to create a better future for the Filipino people rather than simply sending them abroad,” she concluded.

The APPC is a conference held by PIDS every September in observance of the Development Policy Research Month. It convenes public policy experts, researchers, and policymakers to flag to the latter  critical development issues. It is envisioned to serve as a platform to further bridge research and policymaking, and enhance evidence-based planning and policy formulation in the country. ### 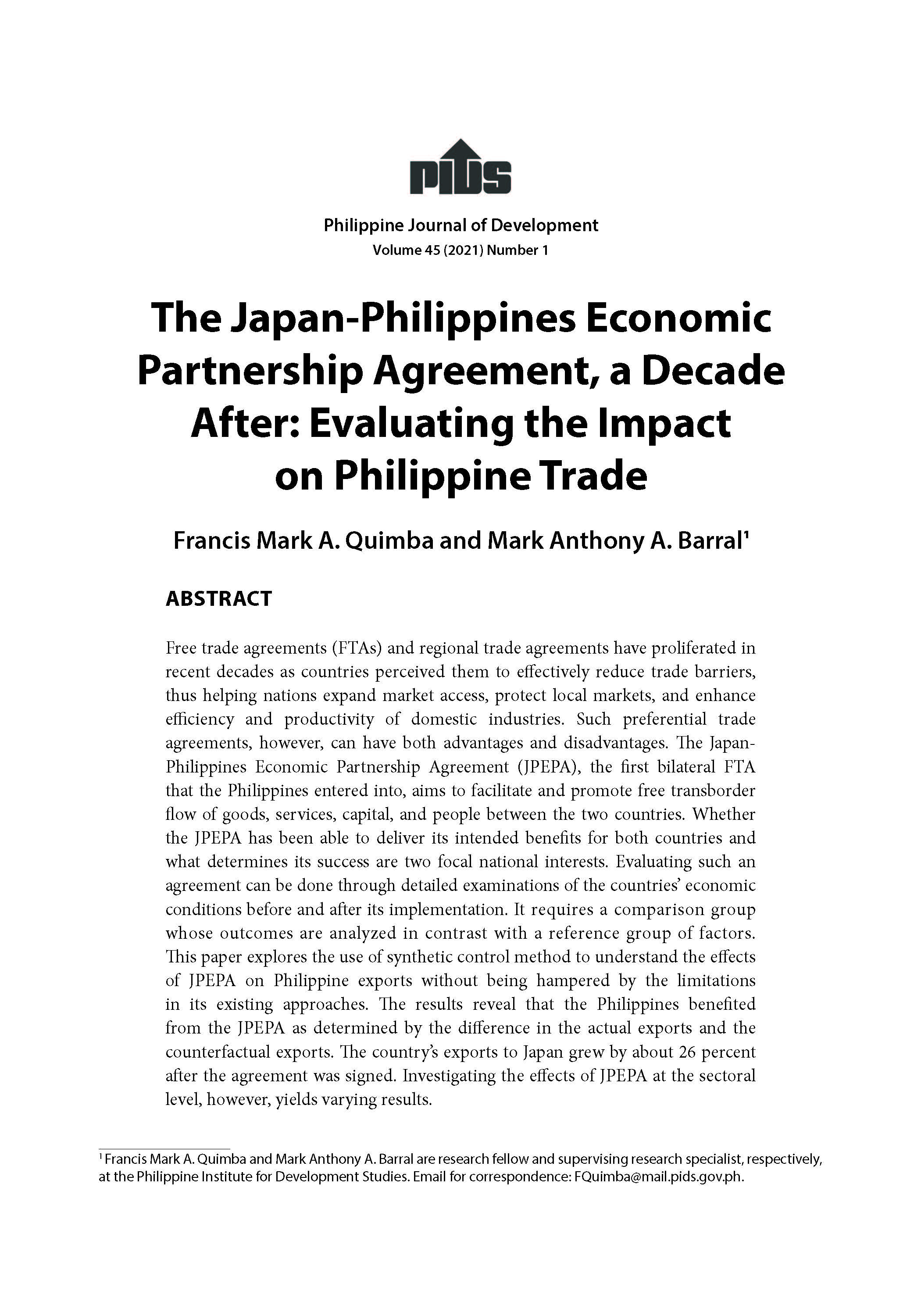 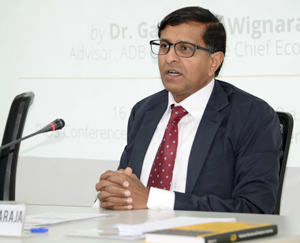 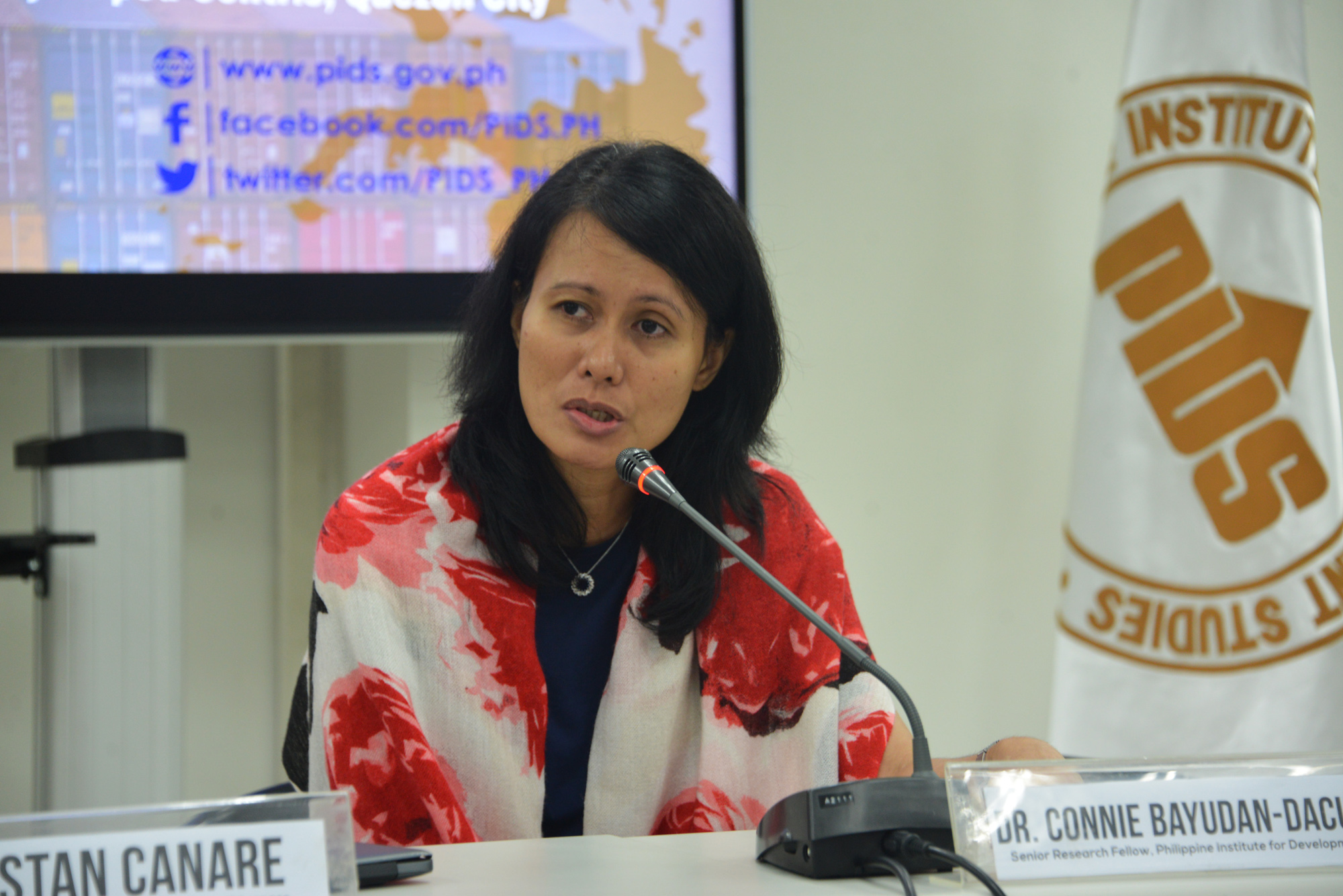 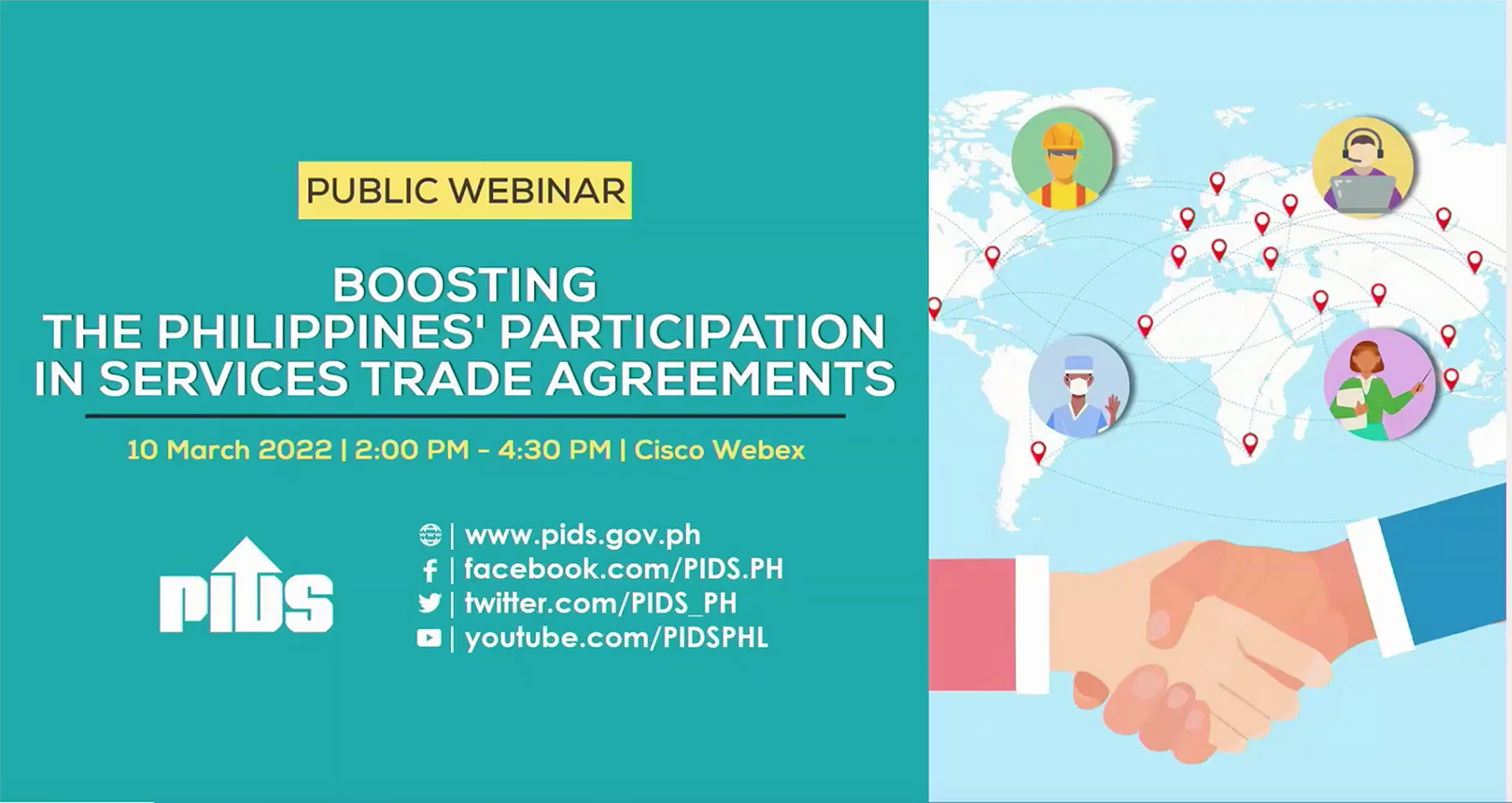 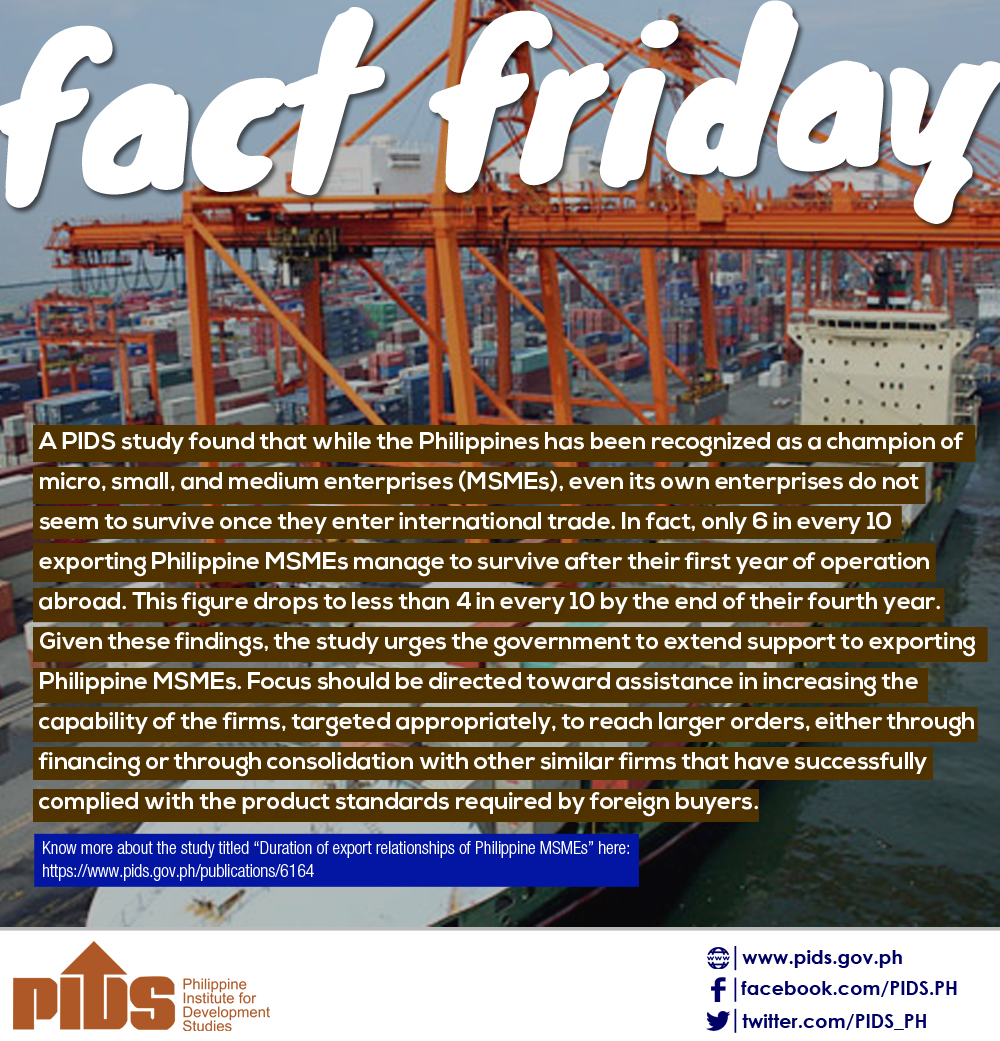 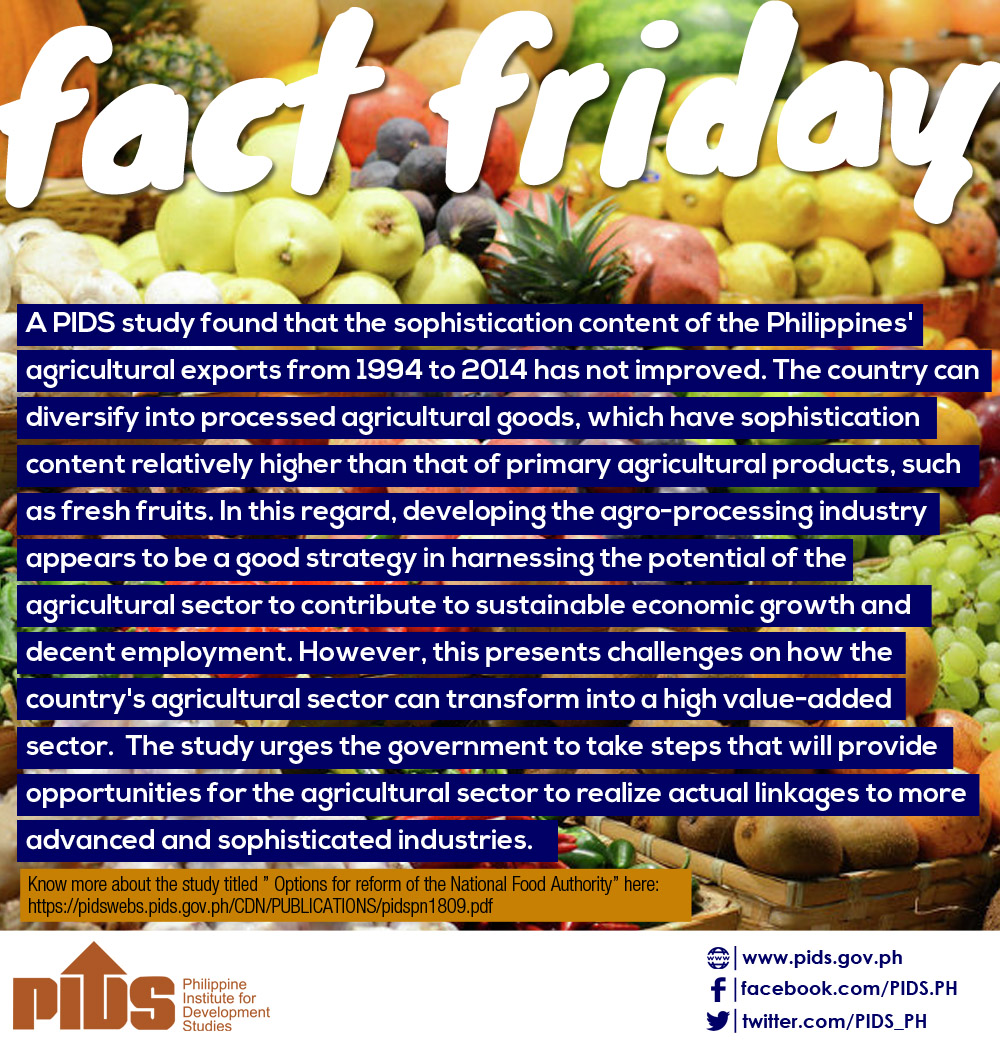 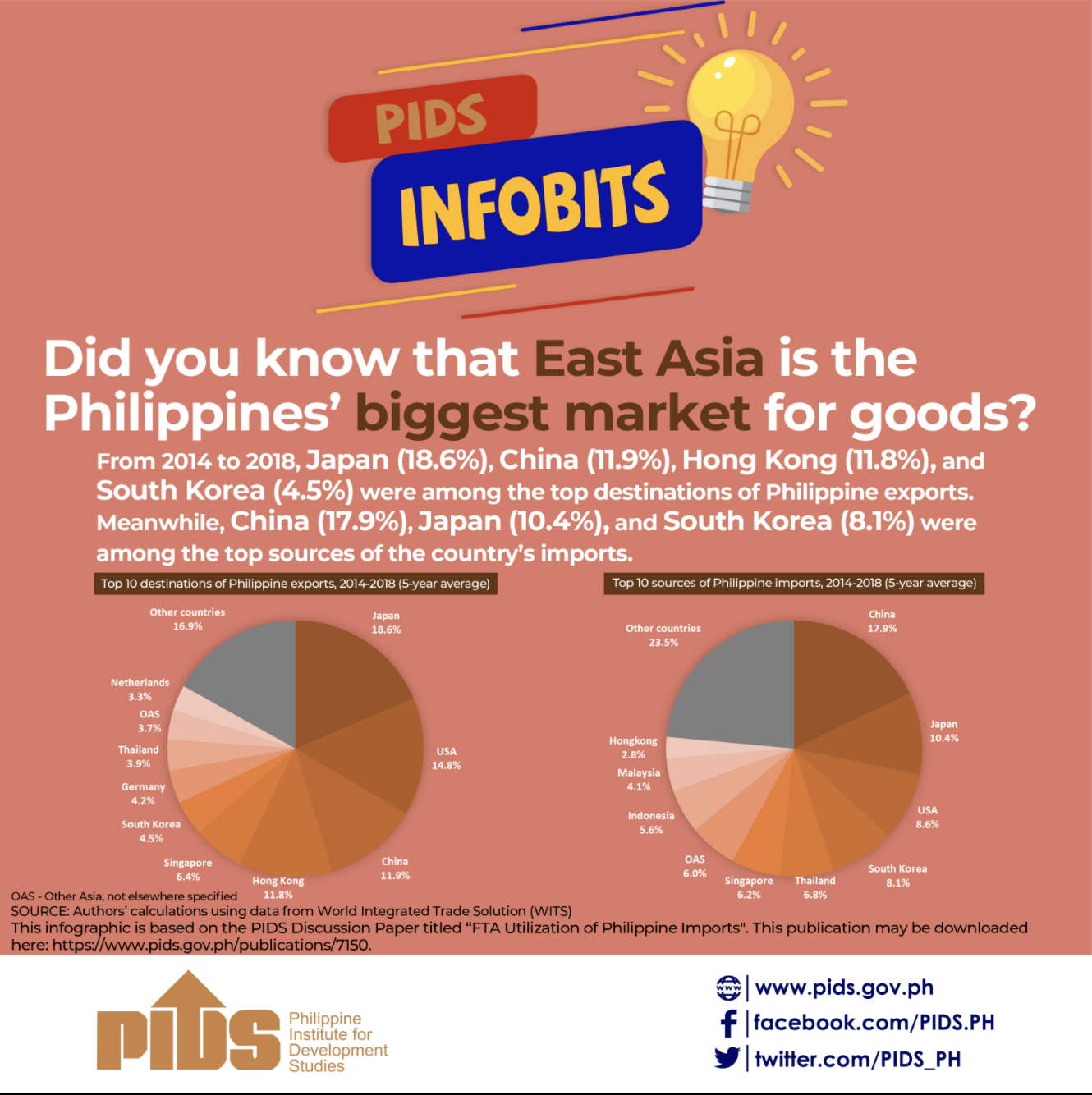