This paper is borne out of the need to address the scarcity of evidence-based studies on barangay financing. It analyzes and evaluates key issues on financing of devolved functions at the barangay level, with particular focus on fund utilization and program allocation, and proposes some policy options addressing the issues. Its key findings show: (a) a mismatch between financial capabilities and devolved functions owing to limited funds being spent mostly on personal services; (b) different priorities of barangays mean different utilization of their barangay development fund (BDF), with some of them failing to spend on important basic services such as education and health, as well as on economic development sector; (c) like other barangays, those in the study areas in Agusan del Sur and Dumaguete City are found to be highly dependent on internal revenue allotment (IRA); and (d) barangays are not addressing the misalignment of revenue and expenditure assignment, as well as the counter-equalizing and disincentive effects of IRA, by not raising enough own-source revenues in their localities and optimizing their use of corporate powers.As a policy intervention to help barangays financially and eventually matter in local service delivery, this paper proposes three major options, namely: (a) giving the barangays the option of allowing the higher local government units (LGUs) to development-enhancing services such as education and health that they themselves cannot deliver effectively and sustainably; (b) pursuing a paradigm shift in understanding and practicing barangay economic development by spending their BDF mostly on economic-enhancing activities aimed at increasing their coffers; and (c) giving incentives to barangays that excel in their own-source revenue performance and creative use of corporate powers. 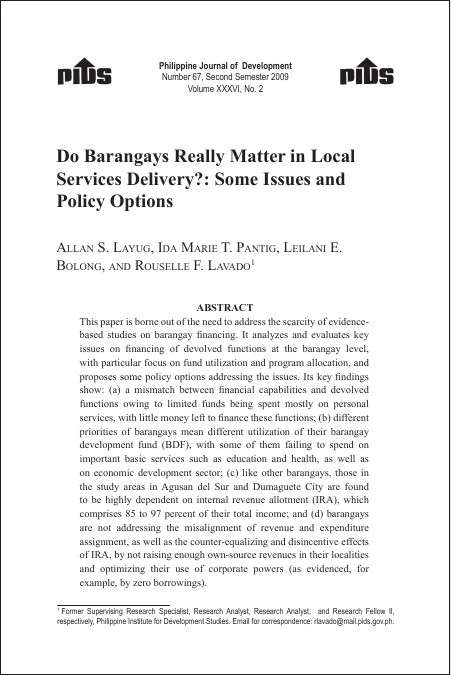