The progress made by the national government in consolidating its fiscal position between 2002 and 2006 proved unsustainable as its revenue effort started to go down once again in 2007 after a brief improvement in 2005-2007. With the more expansionary stance taken by the government in 2009 as part of its effort to shield the economy from the effects of the global financial and economic crisis of 2008/9, the national government fiscal deficit jumped to 3.9% of GDP in 2009 and national government debt started to rise when measured relative to GDP. Clearly, turning around the national government`s fiscal health should be high on the policy agenda. In previous episodes of fiscal consolidation, the easiest way to address the fiscal imbalance is by cutting expenditures. However, this option does not appear to be consistent with the government`s avowed commitment to achieving the Millennium Development Goals and inclusive growth. After estimating the budgetary requirements of achieving the MDGs and inclusive growth, this paper shows that national government revenues need to increase from 14.3% of GDP in 2009-2010 to 17.5%-17.9% in 2012-2016 if fiscal consolidation were to be achieved while providing the fiscal space for the much needed basic social services and infrastructure. The Aquino administration has repeatedly said that the much needed revenue increases will be derived solely from improvements in tax administration rather than from the imposition of new taxes or increases in the rate of imposition of existing taxes. The record of the BIR and BOC in increasing their revenue effort through improvements in tax administration does not inspire optimism, however. This study also cautions that tax administration improvements do not happen overnight primarily because the installation and operationalization of system-wide changes take time. Thus, it argues that there is a need for government to consider the imposition of new tax measures if fiscal consolidation is to be achieved without sacrificing the financing of MDGs and inclusive growth. The least distortionary options in this regard include: (i) the restructuring of excise tax on sin products, (ii) the rationalization of fiscal incentives, and (iii) reforming the road user charge. In addition, the government should also consider the simplification of tax structure by reducing the number of rates at which various taxes are levied or by reducing the number of taxpayers/transactions/types of income which are exempt from any given tax. 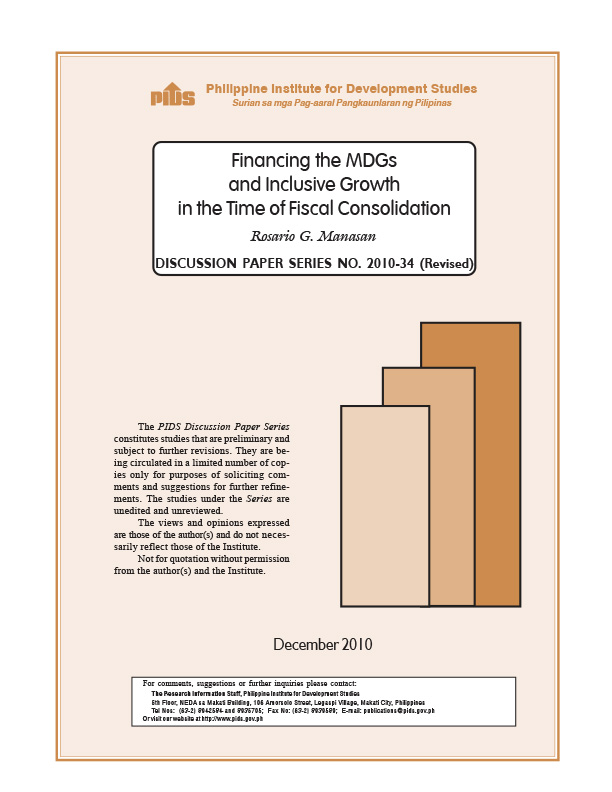